How to Make A Difference in the World 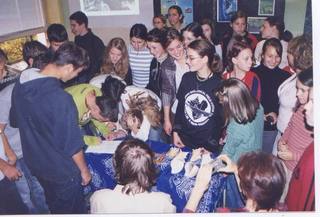 When Jana Rajnohova saw the destruction of the Bimini mangroves, she began a campaign, collecting 700 signatures on a petition requesting that the development be stopped, the mangroves be saved and the Bimini Marine Protected Area be designated. A friend in the Bahamas delivered the petitions to the Prime Minister Perry Christie. 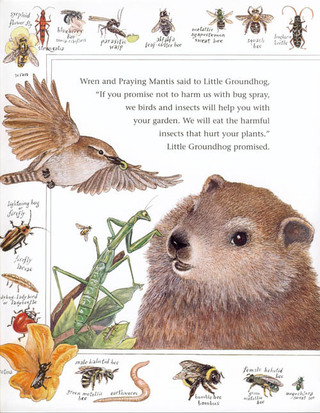 In How Groundhog's Garden Grew, the birds and insects tell Little Groundhog that they will clean his vegetables of insect pests if he agrees not to spray them with bug spray (insecticide). You can help wildlife by convincing neighbors to stop using dangerous lawn chemicals. Some communities have banned them, realizing that they may cause increased cancer in children and pets.
Click for Generation Green and learn about eating and living more safely.

Contact your congressional senators and representatives and ask them to come to your school and discuss the issues they think are the most important in your community. If your river needs cleaning up, bring them a bottle of dirty river water as the kids in A River Ran Wild do (they give a bottle of dirty river water to Senator Kennedy). Regularly write to your senators and reps to tell them what you think about all kinds of issues in your community.

Lynne Cherry is the author and illustrator of over thirty award-winning books for children. Her best-selling books such as The Great Kapok Tree and A River Ran Wild teach children a respect for the earth, have sold over a million copies and are translated into many languages.

Lynne is also a filmmaker and has produced and directed seven short movies, Young Voices on Climate Change, that tell the stories of young people who have reduced the carbon footprint of their homes, schools, communities and states. Two of these movies screened at The American Museum of Natural History during their climate exhibit and at the UN IPCC Climate Talks (COP15) in Copenhagen in December. Lynne screened her films in Copenhagen realizing that the decisions made there about the energy path we taken will greatly affect future generations. Lynne’s film project is designed to create a paradigm shift in the way that society views, and acts to abate, global warming; As with the successful campaigns for wearing seat belts, stopping smoking, littering and recycling, youth played a big role. A trailer of the films can be seen on the websites of many non-profits and at YoungVoicesonClimateChange.com.

Lynne grew up amidst woods and fields in Pennsylvania, attended the Tyler School of Art, got a teaching degree at Temple University and a M.A. in History at Yale University. She has had many distinguished artist-in-residencies at The Smithsonian, Princeton University, and Woods Hole Oceanographic Institution. She received a prestigious Metcalf Fellowship in 2006 and also received Science Writing Fellowships from the Marine Biological Lab and Woods Hole Oceanographic Institution in Woods Hole.

Her book awards are too many to list but can be seen on her website at http://lynnecherry.com/bio.htm. Her most recent book How We Know What We Know About Our Changing Climate: Scientists and Kids Explore Global Warming co-authored with photojournalist Gary Braasch, is the winner of the 2009 AAAS/ Subaru Best Science Book Award, NSTA Recommends and 13 other awards.

Lynne lectures widely—and passionately--about how children can make a difference: If they feel strongly about something, they can change the world. As 14-year-old Alec Loorz says in her movie Kids-vs-Global-Warming says, "Kids have power!" And 13 year old Shannon McComb says, ‘if you adults won’t do something about global warming, we kids are going to take the reins.” Lynne hopes to empower youth through her books and through the Young Voices on Climate Change Films.
Lynne emphasizes to educators how using nature and the environment to integrate curriculum makes a child’s learning relevant. Her books were inspired by her own deep reverence for the natural world.

These Short Movies Feature Young People Who Have Reduced Their Climate Footprint! You can, too!

Some of the young people featured in the Young Voices for the Planet films were on the panel "Kids These Days..Taking Control of Their own Future" at the Society of Environmental Journalists Conference in Miami. People said it was the best panel of the conference conveying HOPE rather than hopelessness. 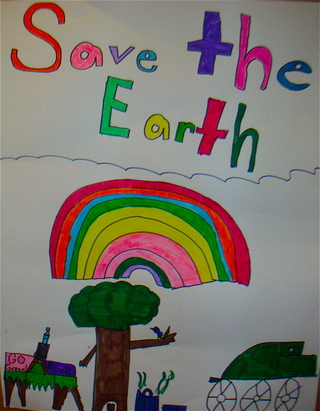 Read about how what you drive and how you live can make a difference and reduce global warming gases.
CLICK HERE to read about Young Voices on Climate Change --a series of short movies produced by Lynne Cherry that feature young people who are reducing the carbon footprint of their homes, schools, communities and states.
CLICK HERE TO WATCH TEAM MARINE. These movies present inspiring, uplifting and empowering international stories of young people, age 11-17, taking action and finding solutions to the global warming crisis. In the course of carrying out some of these pro

For Teachers: The SEER report showed the impact of Environmental Education on Performance--When subjects were taught in an integrating context, test scores went up. Click to read more.

Children convinced MacDonalds to use recycled cardboard containers instead of styrofoam. Kids were responsible for getting the tunafish companies to stop fishing for tuna in places where dolphins would get caught in their nets. Children helped to save Belt Woods in Maryland. Children saved an old growth forest in Michigan and the oldest cypress swamp in Coral Springs, Florida. Kids, you can make a difference in the world!

If you would like to start a garden at your school, click here for information compiled by the US Botanic Garden and the Chicago Botanical Garden.
To see how you can transform your backyard or schoolyard to habitat for other living things, click here.
Learn what you can do to help the planet. Click here to see the Turn The Tide page from The Center for a New American Dream's website.

What You Can Do to Make A Difference
Many of these ideas are from A New American Dream
*Buy less, use less
* Recycle
*Turn off your TV and use that time to learn about your community, organize and write letters.
* Replace grass in your yard at home with native plants that create food and habitat for wildlife.
*keep a Nature Journal. Observe insects, plants and animals. Draw them and write about them.
* Save open space in your community (write the Center for Environmental Education for a copy of the Save the Land You Love issue of Nature's Course)
* Compost cafeteria waste--create rich black earth. Use it to...
* Plant a butterfly and bird garden at your school
* Grow vegetables and fruit trees at home and at school--grow some of your own food.
* If you have a wet area in your schoolyard, plant wetland plants