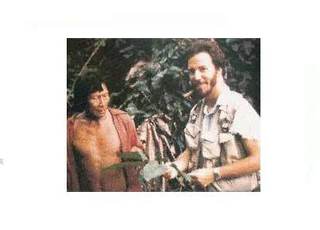 Lynne followed ethnobotanist Mark Plotkin through the rain forest as he learned about the plants that were used as medicines by the shaman (medicine man).
Click here to take a look at the Ethnobotany issue of Nature's Course. You'll love it!!

Letter from Lynne Cherry: "About Mark Plotkin, my ethnobotanist co-author and friend"

(see this book on amazon.com at TALES OF A SHAMAN'S APPRENTICE)

Both books are based on Mark's continuing research over a 20 year period with the Tirio medicine man, Natala.

This story is based on fact. It is true that when miners, missionaries and other outsiders made contact with the Tirio indians, they brought disease. Malaria was especially devastating to the tribes.

The modern world had developed treatments for malaria which was developed from Quinine, which early colonists learned about from the indians of Peru.

It actually happened that through Mark's work with the shaman, the shaman gained back some of his earlier stature in the tribe. Especially when Mark presented the village with ten years worth of research--all gleaned from the shaman Natala's knowledge--the villagers realized that he was a reservoir of knowledge that was important to the entire world.

I made the ethnobotanist in this book a woman because I wanted to have a strong female role model in this book. Indeed, there are many women scientists, including many female field biologists. The most well known are Jane Goodall, Dianne Fossey and Birute Gimlilke but there are hundreds of others doing important work in the field, often in remote rain forest locations. Their work is important for they are adding to our knowledge of the natural world....and often, this information has great practical value as we find plants that help to cure diseases and we learn about the interaction of living things. " 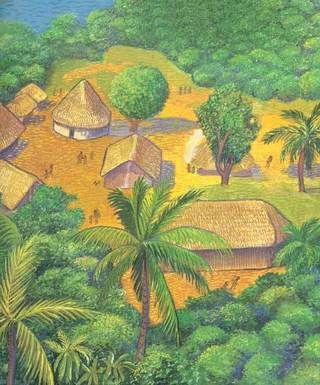 This is the village of Kwamala in Suriname where Lynne went to research this book with her co-author, Mark Plotkin.
Click here for Booker T. Worm review of The Shaman's Apprentice

A Letter from Lynne Cherry about Writing, Researching and Illustrating The Shaman's Apprentice

A Visit to Kwamala Part I

I met the ethnobotanist Mark Plotkin in the 1980's when I was artist-in-residence at The World Wildlife Fund in Wasington, DC. I was there illustrating The Great Kapok Tree and making sure that those illustrations were scientifically accurate.

Mark told me about the research he was doing with the Tirio indians who lived in a village called Kwamala in the Amazon rain forest in Suriname. He was learning from the Tirio shaman--medicine man--about the plants that he used for healing.

Many years later, I found myself in a little bush plane flying for two hours over unbroken rain forest--from horiozon to horizon all I could see were trees.

From the air, as we circled Kwama, we saw all the villagers stop what they were doing and head toward a narrow dirt strip carved out of the forest. The entire village had come out to watch our bumpy landing and greet us. With wide smiles, laughs and shouts of joy, they embraced Mark and welcomed us.

As we walked over the footbridge over the stream and through the village, the prop plane took off again. We turned around and watched it disappear over the horizon.

Mark had been here many times over the years but this was my first visit. I had entered another world.

Young Voices for the Planet DVD

Eight Short Documentary Films Showing Youth Making a Difference are available on DVD but can also be watched online for free at https://www.youngvoicesfortheplanet.com/youth-climate-videos/