CURRICULUM FOR ARMADILLO FROM AMARILLO
This curriculum for GRADE 3 includes "Building background", a Vocabulary Crossword Puzzle and more!

Sasparillo, an armadillo from Texas, wonders where on earth he is. In order to find out he leaves his home in San Antonio and travels north throught he canyons and prairies of Texas. In Armarillo he meets a golden eagle and with her help, discovers where he lives--in a city, in a state, in a country, on a continent, on a planet, in the solar system, in the universe. Along the way, Sasparillo learns about geography, history, the environment, and animals native to Texas. Readers, too, will learn interesting facts and have fun following the postcards that Sasparilo sends to his cousin, Brillo, in the Philadelphia Zoo.

The Armadillo from Amarillo 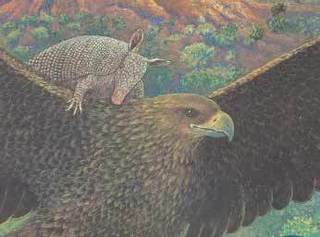 The armadillo sees where in the world he is from the back of his friend the eagle. Geography made fun!

Publisher's Weekly
The musings of a Texas armadillo who wonders ``Where in the world am I?'' are the springboard for a journey and geography lesson that are wide-ranging indeed. Sasparillo climbs a tower in San Antonio, then sets out to explore the variegated terrain--canyons, woodlands, prairies, plains--of his native state. His curiosity unslaked, he then hops aboard a willing eagle's back for a true bird's-eye view. The armadillo and eagle eventually hitch a ride on the space shuttle, allowing them to contemplate the vastness of the universe--and pushing this flight of fancy rather too far. The rhyming text is merely workmanlike, but Cherry's peripatetic armadillo, bright-eyed and with a knapsack hung over his shoulder, makes a jaunty, appealing adventurer, and her meticulous lines and wide-ranging palette do full justice to the country through which he roams. The sheer beauty of her field of bluebells and her stark rock formations, to name just two scenes, speaks eloquently to the need to cherish and protect our earth. Sprinkled throughout are postcards from Sasparillo to a cousin in the Philadelphia Zoo. Ages 5-9. (Mar.)

An armadillo named Sasparillo decides to travel his home state of Texas, and sends postcards describing his journey (in verse) to his cousin Brillo. His travels just heighten his curiosity about "where in the world" he might be, and with the help of a high-flying eagle (and the space shuttle), he learns a little geography. The illustrations are extremely detailed, with accurate depictions of Texas flora and fauna as well as popular tourist attractions.

Children's Literature - Susie Wilde
The author looks at ecosystems through the eyes of an armadillo who is trying to find his place in the world. He explores various wonderful Texas Ecosystems and travels to San Antonio. Searching new heights, he hitches a ride; first with an eagle, then a rocket, always looking back at earth viewing his relation to it. Cherry has a gift of putting complex issues into language and pictures that young readers can understand. Her interesting perspectives and points of departure encourage active thinking about ecology.

School Library Journal
K-Gr 3-Spectacular watercolor and oil-pastel renditions of Texas scenes combine with the rhymed-verse explorations of a curious armadillo to form an excellent map-skills book for beginners. Sasparillo Armadillo decides to explore his native state, and travels from San Antonio to Amarillo. He's still not sure where in the world he is, so he catches a ride on the back of a golden eagle and eventually boards the space shuttle for an even larger perspective. Cherry's love for the environment, shown in The Great Kapok Tree (1990) and A River Ran Wild (1992, both Harcourt), is evident in this book as well. Fields of bluebonnets and Indian paintbrushes sprawl across borderless, two-page spreads, giving credence to the grandeur of the countryside. Indigenous plants, animals (some endangered), and unique geographical formations are introduced via inset postcards that Sasparillo sends to his cousin Brillo in Philadelphia. An author's note is packed with more cultural, historical, and scientific information, disclaiming some of the fantasy elements but assuring readers that ``the geographical information in the text is accurate.'' An ecological jewel that sparkles with multifaceted spin-off possibilities.- Claudia Cooper, Ft. Stockton Independent School District, TX